Why is May Day so important in Oxford?

Why is May Day so important in Oxford?
🕑 9 min read

The origins of the folk traditions of May Day

May Day, like most folklore customs, has its roots in the Dark Ages. The ancient Celts divided the year into four major festivals – Samhain (October 31st – November 1st), Imbolic (February 1st), Beltane (May 1st) and Lughnasadh (August 1st). Beltane, a Celtic word meaning ‘the fire (or fires) of Bel’ marked the beginning of summer for the Celts. The festival celebrated the coming of longer, lighter days, the rebirth and renewal of spring, and the hope for a plentiful harvest in the year ahead. Beltane is still celebrated throughout the UK today, though it is now better known as May 1st or May Day. 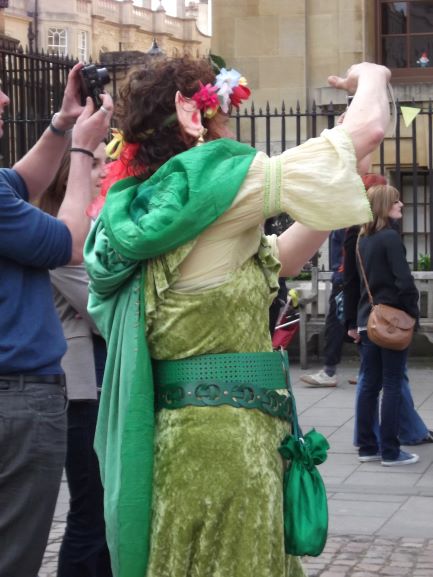 Revellers on May Morning. Photo taken by Rachel Bamber.

The most well-known of Oxford’s May Day traditions is of course, Magdalen College’s choir singing Hymnus Eucharisticus from the top of Magdalen Tower at 6am to waiting crowds below. This tradition, however, has only been documented from about 1674 and marking May Day in Oxford goes back much further than that. More detail on Magdalen College’s role in the celebrations can be found on the Museum of Oxford blog here.

Pre-Christian traditions and pagan superstitions particularly relating to nature, still had a strong influence in the Middle Ages. The earliest accounts of Maytime celebrations mainly refer to ‘bringing in the May’ which is when people would go out into the fields and countryside to gather flowers and greenery to decorate their homes and other buildings. Green has long been associated with life and rebirth, which is embodied by The Green Man, an ancient pagan figure representing fertility and growth. A central figure in May Day celebrations throughout Northern and Central Europe, he is the male counterpart of the May Queen, and is often portrayed with acorns and hawthorn leaves, medieval symbols of fertility associated with spring.

If you look closely, the Green Man pops up all over Oxford and Oxfordshire, in churches, on college buildings and in street architecture. The Green Man features in churches as symbol of rebirth and resurrection, key ideas in Christianity, and serves as an example of how images from the ‘old religion’ were brought into medieval churches to tie them to the Christian faith.

Despite this melding of the two religions, May Day celebrations and their pagan roots were predictably not popular with the Church or the State. In response to these controversial Maytime revels, the Chancellor of Oxford University banned ‘alike in churches, all dancing in masks or with disorderly noises, and all processions of men wearing wreaths and garlands made of leaves of trees or flowers’.

Another springtime tradition, maypole dancing, also faced opposition. Said to have its origins in tree worship when ancient Celts would select a tree, strip its branches, and decorate it with flower garlands, the maypole came to represent this sacred tree and its attendant spirits which were thought to bring good luck. Horrified by this ‘heathenish vanity’ 16th century Puritans campaigned against this and other May celebrations. Vicar Thomas Bracebridge led an attack from Banbury which led to an edict being issued from Banbury’s constable in 1589 to ‘take down all maypoles within his district and to repress and put down all Whitsun ales, May games and morris dances.’ Some, including the Sheriff of Oxfordshire at the time, thought this too extreme. The clash between those who felt May Day celebrations represented harmless custom and those who felt it to be rejoicing in ungodly and sinful behaviour, led to somewhat of a stalemate which continued into the 17th century.

The death-knell for May Day finally sounded following the English Civil War and Oliver Cromwell’s Protectorship.  An Act of Parliament in 1644 banned maypoles and maypole dancing throughout the country, and other May revels followed. By 1645 the traditions of old had all but vanished. The Restoration of the monarchy in 1660 signalled the return of festivities. Charles II, like his father, viewed May Day events as harmless recreations, and ensured his subjects’ support by erecting a 40-meter-high maypole in London’s Strand – which allegedly remained stranding for 50 years!

So, we have the Celts (and some would say the Romans) to thank for the colour green and flower crowns being the outfit of choice for some on May morning, but what about the High Street’s other residents? You can’t walk two steps on May Day without coming across Morris dancers. The origins of ‘the Morris’ are unclear; not much is known about the folk dances of England prior to the 17th century, but the earliest references put Morris dancing in a courtly setting, a popular entertainment imported from village festivities for court masques held by Henry VIII. It is thought that when Morris dancing moved from a courtly to a rural setting, it could have acquired elements of medieval folk dance – not that there are any records showing what this would have looked like. Another suggestion is that what we now think of as traditional English folk dance originated from Italian dances imported to England in 16th century.

By the mid 17th century, the working peasantry primarily took part in Morris dances, especially at Whitsunday. The tradition was later suppressed, like other folk practises, by the government of Oliver Cromwell, and restored by Charles II. Morris dancing remained popular until the industrial revolution when that, and it’s accompanying social changes, caused a decline in popularity.

Oxford has an extremely strong Morris dancing tradition – two Morris sides in particular co-ordinate the dancing held during May Morning, the Oxford University Morris Men and the Oxford City Morris Men. There are several other sides active throughout Oxfordshire however, and four teams can claim a continuous lineage of tradition throughout their village. These are Abingdon, Bampton, Chipping Campden and Headington Quarry. The Headington Quarry side are actually widely regarded as having had a hand in the Morris revival.

In 1899 Cecil Sharp, a folk song collector, musician and composer was spending Christmas with his family in Headington. On Boxing Day, a man named William Kimber who had recently completed building work on the house where they were staying, arrived at the door with the Morris team he was a member of – the Headington Quarry Morris dancers. Intrigued by the music and dancing, Sharp invited Kimber to come back so he could write down their songs. A decade later, Sharp began collecting their dances. Thanks to Sharp’s interest and Kimber’s knowledge, a nationwide revival of this folk tradition followed. 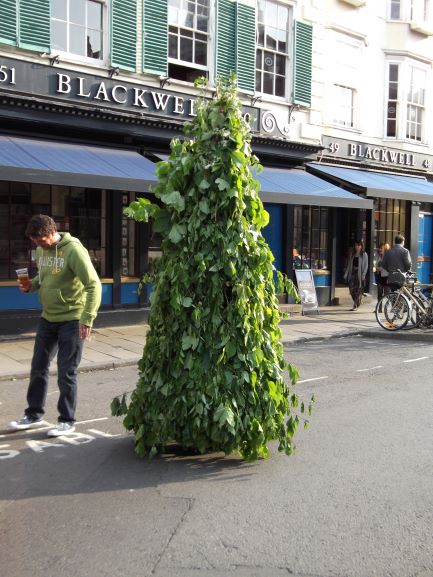 Along-side the Morris men with their sticks, bells and handkerchiefs, you may catch sight of the ‘Jack’ or the ‘Jack-in-the-Green’ which was introduced to May Morning displays by the Oxford University Morris Men in 1951. The ‘Jack’ is a bush with someone inside its wicker frame and it can often be seen wandering around the city centre in the morning hours of May 1st. Though it appears much later in folklore (the earliest record of a Jack-in-the-Green appears in 1775 in The Morning Chronicle and London Advertiser) it appears that the Jack-in-the-Green could have an earlier counterpart in the Green Man.

According to folklorist Roy Judge, it’s unlikely that the Jack-in-the-Green existed much before 1770. It was only in the 19th century that the ‘Jack’ came to have a larger part in May Day processions and came to be associated especially with chimney sweeps as a feature of their parades, as they celebrated May Day as a holiday. When many London chimney sweep families migrated to other towns in the South-East during this time, they brought the Jack-in-the-Green tradition with them. The first ‘Jack’ in Oxford was reported in 1828. In 1886 one was brought to Oxford by the Hathaway family, a family of chimney sweeps.

Modern May Day in Oxford

What about Oxford’s more modern May traditions? Well, Oxford University tends to have its big balls at the end of the summer term, but usually a couple fall around May Day which explains the prevalence of Oxford University students in tuxes and ball gowns at many May Day celebrations. Not to be outdone by the ‘Gown’, the ‘Town’ hold a multitude of May-eve parties and events, some going on all night for those hardy enough. Pubs and cafes all over Oxford open early to welcome May revellers with a cooked breakfast, sometimes washed down with a glass of fizz (a May tradition which is a personal favourite of mine!). Another, less successful and more dangerous tradition developed roughly around the 1970s where university students would gather on Magdalen Bridge after the singing to jump into the river Cherwell. The river is deceptively shallow, only knee-deep in some places, which has caused injuries ranging from fractured ankles to fractured spines. The bridge was closed completely between 1998 – 2001 and 2006 – 2009 to try and deter jumpers, and there has been a police presence on the bridge every year since.

With the arrival of COVID-19 in 2020, May Day celebrations were forced to move online – even Magdalen College Choir held their singing virtually and the story was much the same in 2021. This year, after two years of lockdown, the traditional May Day crowds are expected once again. So, if you do find yourself out on Magdalen Bridge in the early hours of May 1st or perhaps tucking into a champagne breakfast somewhere nearby – think of warmer, lighter days and raise a glass to the joy of spring!