Why can’t the people of Oxford decide how to pronounce Mary’s surname?

Mary Magdalen’s claim to fame is that she was the first person to witness Jesus’s resurrection. Oh, and the Da Vinci Code! Mary M was also one of Jesus’s followers and was a witness to Jesus’ crucifixion. But who is Mary ‘Maudlin’ and why is she known as such in Oxford? We’ll get to that. First, a few other myths busted.

Mary Magdalen did not wash Jesus’ feet, that was actually an unnamed woman, later spuriously merged with Mary Magdalen, and there is no reason to think that Mary M was a sex worker at any point, that legacy is due to another erroneous merging with another unnamed woman. Certainly, Jesus was very lucky to have had Mary M and his other female followers. Had he not had the loyalty of these women and instead depended entirely or primarily on the menfolk, as is sometimes thought, there would have been no significant witnesses at the crucifixion, and no one to visit his tomb either. Though, we might assume that one of Jesus’ male disciples would have gotten around to it eventually. Jesus chose to present his 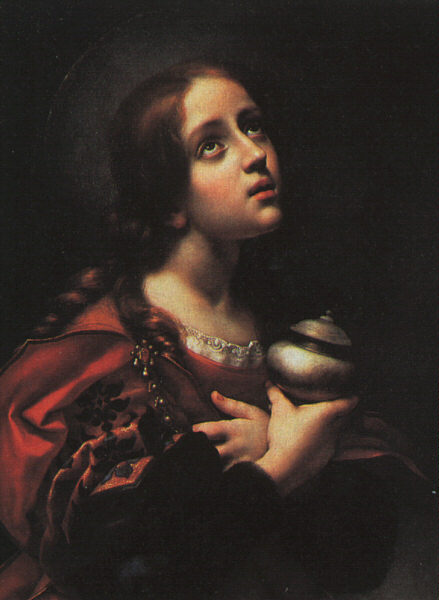 resurrected self to Mary Magdalen and asked her to be the messenger of his resurrection – which is why she is known as ‘The Apostle to the Apostles’.

Given such credentials, it’s no wonder that Mary Magdalen was a very popular saint in England and Europe, with her feast day celebrated in the height of summer, on 22nd July. Her popularity is attested during the Anglo-Saxon period in England due to the presence of her feast day in Bede’s Martyrology of the 8th century and in early monastic calendars. Her cult became increasingly popular throughout the Middle Ages: in 1100s, only two or three churches were dedicated to her but by the end of the Middle Ages, nearly 200 churches in England were dedicated to the saint. She also shows prominence among the saints chosen for visual depiction in churches up and down the country and was the first female saint to have a college dedicated to her at Oxford. These days Mary Magdalen sits in good company alongside St Hilda, St Anne and St Catherine, who have all given their names to Oxford colleges.

The legacy of Mary Magdalen’s popularity during the medieval period can be seen in Oxford, not just in the college which takes her name but also Mary Magdalen church (near St Giles) as well as a bridge, two roads, and a pub. But why is she sometimes pronounced ‘Maudlin’? Mary M has been confusing residents, students, and visitors alike, with the mystery of how to pronounce her name for years.

So why is the college pronunciation ‘Maudlin’?

It’s all in the timing. The reason for the quirky pronunciation hinges on the period during which the college was built and the common practices of the time. According to Magdalen College, during the 15th century, English speakers called Mary Magdalen Mary ‘Maudelayne’ without the ‘g’ sound. Later, we put the ‘g’ back in. Magdalen College persisted with the traditional pronunciation from the time of its founding and so that is what we have today.

The church, built before this 15th century trend, maintains its ‘g’ sound and is pronounced in the predictable way. Whereas, the college, built at the height of g-less trendiness, loses its ‘g’ and persists with its quirky 15th century pronunciation ‘Maudlin’. It’s not the college that is quirky as such, but the 15th century. It is from this same period that we get the adjective maudlin, meaning to be sad or sorrowful, which comes from the way Mary Magdalen is depicted in the art of that time and from the pronunciation of her name in late Middle English as ‘Maudlin’

Now you know, as you meander around Oxford, when to say ‘Mag-duh-lin’ and when to say ‘Maudlin’. Except for that one road between Iffley and Cowley, and of course the pub. Maybe pop by for a drink and enquire.