The nightlife of Oxford occupies an important place in the story of the city, and in its historic contribution to the wider world.

Nightlife can embrace or ostracise. Some spaces are widely accessible – open to non-students and actively welcoming to those who identify as LGBTIQA+. Other spaces bar entry in accordance with university tradition.

This accessibility is important, because the international importance of the university gives Oxford’s night-time scene real power. Over time, it has been shown to dictate national politics, shape culture, and embody the systemic social divide in this country. In many ways, traditional systems of power are perpetuated by Oxford’s nightlife.

There is also an important relationship with film and literature. Oxford’s nightlife has been widely portrayed in fictional media, and at the same time venues in the city have played a role in the discussion and production of literary creations. 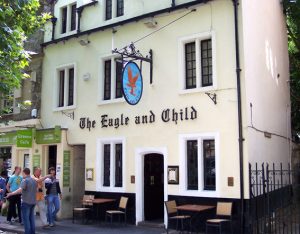 The public houses of Oxford have long contributed to the cultural fabric of the city and the wider world. The most prominent example is the Eagle and Child pub, founded in 1650. In the early to mid-twentieth century this was the place in which J. R. R. Tolkien and C. S. Lewis first shared the manuscripts of The Lord of The Rings and the Chronicles of Narnia, reading them aloud to a group of writers known as ‘The Inklings’. This group, which included poets Owen Barfield and Charles Williams, was a forum in which the writers discussed their work. They met in the ‘Rabbit Room’ of the Eagle and Child, and in Lewis’s own rooms at Magdalen College.

Given its role in the creation of this internationally loved and influential fantasy literature it is sad that the Eagle and Child has not reopened its doors since the Covid pandemic.

Another famous pub in the city is the Bear Inn, just around the corner from the Museum of Oxford. It has been a drinking establishment for more than 750 years and is the oldest pub in Oxford. The Bear Inn is famed not just for its age, but for the huge number of ties displayed on its walls. Landlord Alan Course first asked a visitor to donate his tie in the 1950s. Since then, the pub has amassed a collection of over 4,500, representing various schools, colleges, and sports teams. The Bear did survive lockdown and is still a popular evening venue in Oxford, as well as a cultural symbol of university life.

Intertwined with the cultural history of Oxford’s pubs, clubs and bars is its queer history. The Museum of Oxford, as part of its Queering Spires project, compiled a list of the most important queer spaces in Oxford over time. Some of these venues lasted only a few years – Oxford’s queer landscape has always been changeable. But the city’s queer residents continue to create spaces in which they can mingle freely and evade prejudice. 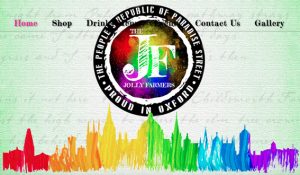 A historical example is the Red Lion pub, enjoyed by theatre-goers because of its location close to the Oxford Playhouse and the New Theatre. This institution provided a safe space for gay Oxfordians to socialise away from the homophobia of the 1970s. When it closed down, the tradition of a dedicated queer space in Oxford continued. In 1983, the Jolly Farmers began its tenure as the longest-running LGBTIQA+ pub in the city.

Other queer spaces of Oxfordian nightlife have not fared so well. The Royal Blenheim in St Ebbe’s Street served a queer clientele for most of the 2000s, until new owners brought homophobic discrimination. The Brewery Gate, a pub for lesbians founded by Lulu Hudson in 2003, lost its title as a queer space after its sale to new owners in 2010. But the vibrancy of Oxford’s queer nightlife will not be quashed. Newer clubs, such as the Plush Lounge on Frewin Crescent, work alongside older pubs like the Jolly Farmers to ensure queer spaces in Oxford are maintained.

Clubs and societies for Oxford students have had a fundamental impact on political life in Britain for centuries. The Bullingdon Club, reserved for Oxford students of the highest social and financial calibre, was established in 1780 for hunting and sporting purposes. In film and literature it has been depicted as an institution of debauchery, destruction, and entitlement. Examples include the Libertines of Netflix’s Anatomy of a Scandal (2022), the group of young, male Oxfordians in The Riot Club (2014) inspired by Laura Wade’s play Posh, and, most famously, the Bollinger Club in Evelyn Waugh’s Decline and Fall (1928).

The club is exclusive and is cloaked in secrecy, imposing an oath of silence on its members, so it’s impossible to know if these fictional portrayals are accurate. It was alleged at one time that as part of the initiation process a prospective member had to set light to a £50 note in front of a homeless person. None of this is verifiable, but there are other accounts which suggest it is not so far from the truth. These include a police record of criminal destruction following a Bullingdon Club meeting at the White Hart pub in Fyfield, just outside Oxford, in 2004. Similar events occurred in 2006 and 2015.

You only have to look at the British government over the past century to understand why such a club is significant. Notable politicians who claim membership include former prime ministers Boris Johnson (2019–22) and David Cameron (2010–16), politician Jo Johnson (now a baron) and former chancellor of the exchequer, George Osborne (2010–16). The Daily Beast reports – based on a nineteenth-century membership record – that in one 50-year period a further 50 MPs, 100 peers, and five First Lords of the Admiralty were former members of the Bullingdon.

And it’s not just politics. Bullingdon alumni include CEOs of companies such as Boots UK, Ocado and Serco, journalists such as David Dimbleby, Sir Ludovic Kennedy, and Harry Mount, along with powerful financiers such as Jacob and Nathaniel Rothschild. Past royal members include King Frederick VII of Denmark and King Edward VIII.

In recent decades, negative press about the club has made politicians more reticent about their membership. David Cameron confessed in his biography that his membership of the Bullingdon had ‘haunted me for most of my political life’. The club’s popularity among Oxford undergraduates has, at least openly, declined. The Oxford University Conservative Association (OUCA) now prohibits all Bullingdon members from its ranks. Despite this, the continued presence of Bullingdon alumni in the highest spheres of British society is evidence of its sustained power and of the historic significance of Oxford nightlife for the country. Normative figures of power (white, male, heterosexual and privileged) use the close ties formed in this Oxford society to dominate national politics.

It is not surprising that the history of Oxford nightlife is marked by the same contradictory mixture of brilliance and notoriety as that of the university itself. Its impact is multifaceted. On the plus side, Oxford nightlife has provided its visitors and residents with social spaces to enjoy the company of like-minded others, and has complex cultural links. The downside is that Oxford’s night-time scene – particularly that which is exclusive to students – has for centuries had a questionable influence on British governance, global finance, and journalistic media. Times might be changing but the stain of the Bullingdon remains.

Photo of Eagle and Child © Raymond Knapman CC BY SA 2.0