The hidden history of St. Ebbes

What lies beneath the Westgate?

The Westgate Centre has served as a staple in Oxonian everyday commerce since its 1972 opening, and with an enormous 2017 renovation, has solidified its reputation as the city’s premier shopping hub, accenting the surrounding district. Indeed, its refurbishment, which acts as the centrepiece of a greater rebuilding project, leaves little trace of the past for the now largely-forgotten suburb of Oxford, St. Ebbes.

From the early nineteenth century, a quintessentially Victorian neighbourhood boomed near the centre of Oxford. Characterised by narrow streets of brick and stone townhouses, the parish of St. Ebbes was occupied primarily by tenants on the fringe of middle-class status, their numbers growing with the quantity of industrialisation in the city. In 1818, the gas works were built to supply Oxford, a highly successful operation which continued to expand until 1882 at which point other facilities had to be created in a less urban location. Beside them, new roads popped up left and right, of which only a scant bunch remain. One of the few, Friars Wharf, gives a little insight into the quick progression of British transportation from canal to railroad. Soon after this street was completed with the goal in mind of collecting cargo from the River Thames, the Old Gasworks Bridge, as it is now known, was built in 1886 to supply coal to the plant and to connect it to the Great Western Railway. With little investment into drainage systems, sewage began to contaminate the area’s ground water during the mid-nineteenth century, leading to serious health issues, including several cholera outbreaks, which, although acceptable drainage systems were installed in the 1870s, reportedly persisted until the 1930s. Much to the protest of its residents, by the early twentieth century, St. Ebbes was being eyed up for redevelopment, seen not as a modest blue-collar enclave amid a historical, academic city but instead a shoddy, run-down vicinage with wasted potential given its location by local government. 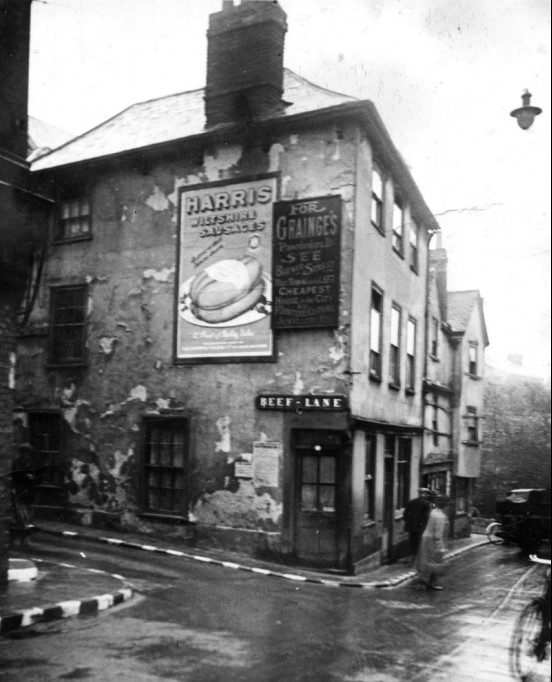 The Name and People

Although few residential properties remain, the district’s namesake stands as strong and active as ever. St. Ebbes Church, opened in 1816, stands on the site of another which was thought to have been dedicated to St. Æbbe of Coldingham, an impressively southern branch of the medieval sect. A seventh century daughter of the Northumbrian King Æthelfrith and, after his death in battle, an exiled nun near the modern-day border between England and Scotland, it remains quite the mystery how and why an Oxford church bears her name. Its first reference dates back to 1005 when bestowed upon the newly founded Oxfordshire monastery, Eynsham Abbey, and was even then referred to as the “ancient St. Ebbes”.

In 1224, the Franciscans, a religious order founded by Saint Francis of Assisi, settled directly beside the church, and asked permission to make a little gate in the city’s wall for ease of access. Among these friars was the famous Roger Bacon, inventor and empiricist philosopher, who lies buried in the parish. Roger Bacon Lane and Littlegate Street sit close by. More recently (although not particularly recently), the parish of St. Ebbes became the home of Henry Taunt, renowned photographer, in 1842. Taunt’s early childhood was quite a typical one of the neighbourhood he grew up in. A plumber father, his lower class status forced him into the workforce early. By age 14, in fact, his CV included working at five separate locations. For a glimpse into what kind of work was required of all members of a family in St. Ebbes at this time, I would suggest reading “Stories from Oxford’s workhouses”, a fictional piece on the Museum of Oxford website based on the real life experiences. Fortunately, Henry’s rare talent was soon recognized by Edward Bracher, owner of the first commercial photography company in the city, and Taunt’s photographs caught on. A 1905 photograph of his gives a glimpse at the state of Oxford’s St. Giles fair over a hundred years ago. Another popular shot of his depicts a young Winston Churchill’s induction into the Ancient Order of Druids, a group that he too was a member of (and which interestingly brags to be the oldest druidic order in continuous existence), at Blenheim Palace in 1908.

If there was one thing of which St. Ebbes was not in short supply, it was pubs. In 1835, along the short St. Ebbes street, there were five taprooms, one of which, the Royal Blenheim, is still running. On the adjacent Church Street sat three more, the Eight Bells, the Rising Sun, and the Britannia. In general, however, business in the district was difficult to reap and entrepreneurial spirit was often crushed by lack of economic demand. We can see one such example from ownership deeds of a nice complex of property between Blackfriars Road and Friars Street bought up by Michael Mercer between 1833 and 1849, who is thought to have built the initial bakehouse amongst the properties. The premises were bought by James Cooper in 1873, who after converting it into a bakery, filed for bankruptcy in 1877. More details about the history of the property in the area can be found in a piece by Chris Gilliam, at the Oxford City Archive. Such financial inactivity, it seems, became so much the reputation of St. Ebbes that plans were in the works for a redevelopment as early as 1938. Like most of life during the Second World War and its aftermath, these aspirations were put on hold but from 1950 until 1970, the area underwent serious reconstruction. Buildings and streets alike were demolished as the majority of residents were moved out of their homes which were to become car parks. The famous gasworks closed in 1960, the final twist of the knife, leaving St. Ebbes with its name alone, back turned on its past, marching into its commercialised future.