Annabelinda: from humble beginnings to the holy grail of fashion 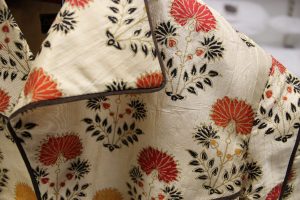 Annabelinda was an Oxford fashion boutique, located in Gloucester Green between 1971 and 2012. Its founders were Anita Woodhead (who left soon after to live abroad) and her friend, Belinda O’Hanlon, who left her Geography undergraduate studies at St Anne’s, Oxford, to set up the sewing partnership. The name of the shop and fashion label was an amalgamation of their two names. They initially made and sold their dresses from a small room on Park End Street – a converted Gents toilet – before moving to premises on Gloucester Street. Belinda O’Hanlon described the early days of the business to an Oxford Times reporter; ‘we had a sign saying: ‘Annabelinda makes clothes in a day’. We put velvet on the walls to hide the tiles, and people would come in with material to be made up into dresses.’ 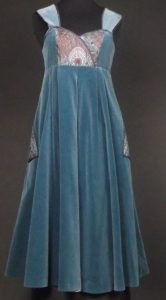 Their dresses were popular very early on with Oxford undergraduates. One notable customer was Benazir Bhutto, the future Prime Minister of Pakistan, who was a student here from 1973.  The boutique, however, soon gained wider recognition. During the 1970s, Annabelinda’s dresses could be found featured in glossy fashion magazines such as Vogue. Famous personalities of the time, including Prunella Scales, Judi Dench and Dani LaRue, had dresses made by Annabelinda. The label expanded beyond Oxford with outlets at Liberty’s and Harrods in London, and shops in Nantucket, Oslo and Padua. In 1975, Annabelinda was one of three labels chosen to design a dress to commemorate Liberty’s, the historic London department store, 100th anniversary. This was a prestigious commission and the dress was featured in the pages of the Times fashion supplement in August of that year.

The advertisements from the time were designed by Belinda O’Hanlon’s husband, Redmond, who had also studied at Oxford University. They are slightly risque and clearly aimed at a well-educated audience; ‘William Harvey of Oxford: discoverer of the circulation of the blood. Annabelinda of Oxford: discoverer of ways to make it circulate a little faster’.  Another advert states, ‘For the greater delight of your paramour, Annabelinda will make you a pinafore’; a reference to the pinafore dresses for which Annabelinda was well known. These adverts appeared nationally in the Observer, Vogue but also in the Oxford news sheet, Daily Information. A 1979 advert from Country Life meanwhile is ironic in tone but speaks to a socially well-connected and cultured clientele; ‘Annanbelinda. Dress designers of genius for formal receptions in Royal Societies; for clandestine meetings in unmentionable places; for gala performances at the opera (and at later hours elsewhere)….’

The boutique hit national headlines in 1981 when the notorious Howard Marks, former Oxford undergraduate and international cannabis smuggler, claimed that he had planned to use Annabelinda as a front for his work with MI6. According to his autobiography, he had also funded the move from small premises on Park End Street to 6 Gloucester Street to provide a respectable front for the wealth gained from his drug dealing. 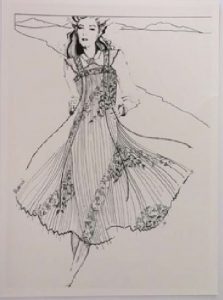 Annabelinda has significance beyond Oxford, as part of a new British boutique fashion movement of the late 1960s and early 1970s. Annabelinda dresses were often made using traditional Liberty fabrics, such as the classic Peacock design, and floral cottons, which looked back to a pre-industrial, rural England. Annabelinda was also known for its hand-made bridal dresses. Naomi Banks, a former seamstress remembers the first bridal order she took in the Oxford shop, ‘what was most special about the Bridalwear was the detailing of embroidery or hand painting, the use of another fabric as piping and binding and the originality of the designs.’

The detailing and the quality of the finish make Annabelinda designs highly sought after amongst fans of vintage fashion.  Annabelinda designs have featured in recent exhibitions of British fashion including ‘Liberty in Fashion’ (2015-2016) at the Fashion Textile Museum in London and the 2018 the Liberty Art Fabrics Fashion retrospective at Edinburgh’s Dovecot Gallery.

Annabelinda was a notable presence in Oxford for more than 30 years.  Although its fashion heyday was in the seventies, it continued to offer handmade clothing in Oxford for over three decades.   Posts on social media and in the printed press reveal how fondly the label is remembered, particularly by those who aspired to own an Annabelinda dress as students in 1970s Oxford. For many customers, both local and nationally, the brand continued to conform to a nostalgic image of England and the city until its closure. As the writer of an article in Country Life in 1983 put it, ‘Annabelinda is an English designer with a special talent for creating lovely clothes with a strong English flavour. It seems right that she should live and work in Oxford, surrounded by beautiful old buildings, rich with tradition, and a highly charged intellectual atmosphere.’