Plant Oxford: from Bullnose to BMW

Off of the Oxford Ring Road sits an array of white and grey cubic structures, whizzed past every day by workers starting their days, perhaps sparing a glimpse for the creatively placed MINI Cooper on the roof, posing pompously next to a billboard of itself. A sharp contrast to the architectural grandeur that is found just a few miles down the same road, it can be easily overlooked that this site has an immense history in its own right. In 1876, the Oxford Military College opened on these grounds taking cadets as young as 13 from the UK and British colonies around the world. Funded by Prince George, Duke of Cambridge, buildings were purchased from the Cowley Middle Class School and were expanded upon (although most of the said expansions have since been demolished) while colonial scholarships were set up, likely to attract colonial children to a life of military service in their overseas British territories. The college’s prestige, however, was short-lived as it was driven to bankruptcy in 1896, only 20 years after its opening. The stock of the British automobile, meanwhile, was exploding. Today the leading manufacturing employer in the county, assembling more than a thousand cars a day, and the head of a pyramid of factories (to engine manufacturer Plant Hams Hall, and body pressing manufacturer Plant Swindon), the property’s industrial beginnings trace to 1912 when the town community of Oxford scored a minor victory over that of the prevailing gown. 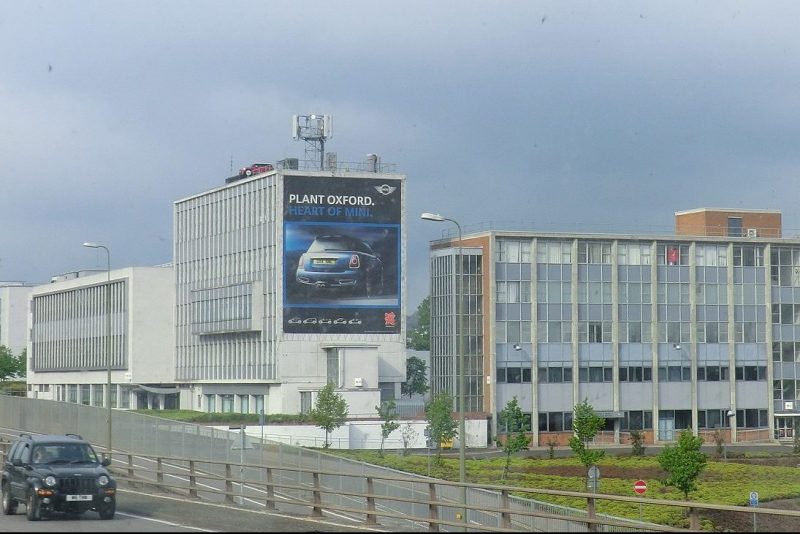 Taking inspiration from the assembly lines of Henry Ford in the United States, a rather successful engineer and bicycle repairman William Morris purchased the college lot to move into automobile production, starting with his recent design, the “bullnose” Morris Oxford. Finding some success amid a market dominated by less expensive American vehicles, the demand for British cars after wartime grew exponentially and WRM Motors Ltd. was exceedingly cheerful to pitch in. From 1919 to 1925, car production of William Morris’s cars rose from 400 a year to 56,000 a year, requiring massive expansion to other locations across England, and to the original factory in Cowley, new railroads to accommodate workers’ commutes. It was around this time that Morris Motors overtook Ford as the UK’s largest automobile manufacturer, moving Morris clearly into the national spotlight as a titan of industry.

With the Second World War looming the Oxford plant, as recommended by the government, expanded its facilities to accommodate the production and repair of aeroplanes. The de Havilland DH.82 Tiger Moth was a very popular model manufactured here, bought by the Royal Air Force for training pilots recently joined. As time progressed, the company’s founder became more authoritarian with his control over the company, refusing other key members shares of the business and refusing to adapt to new and necessary market techniques to keep up with competitors. In 1952 Morris Motors merged with the Austin Motor Company to form the British Motor Corporation, which Morris headed for a year before his retirement. From 1966 to 2000, the company to which the plant belonged went through a long series of acquisitions, mergers, restructurings and renamings, from the British Motor Holdings through British Leyland and the Rover Group to British Aerospace and BMW, which despite selling the Rover Group in 2001, kept the site to produce their new MINI line.

To prepare for this change, a large part of the factory was demolished and the land sold to be incorporated into the Oxford Business Park, now office space to the global headquarters of Oxfam, the European headquarters of Harley-Davidson, and major outposts for Royal Mail and HM Revenue and Customs. Next to these, the renovated Oxford plant now assembles about 1,000 cars a day (one every 67 seconds) and employs over 3,700 employees. BMW’s declaration that MINI will be the first of their brands to become fully electric starts with Oxford, as does their strategy to reduce emissions from all plants by 80 percent by 2030. It seems that 108 years later, this old and ugly factory, still often called “Morris’s”, strives for history yet.

Learn more about William Morris’ role during the Second World War in this post.