Oxford asserts its civic identity in 1191

In the sealed charter of 1191, Oxford donated the island of Midney or Medley (‘with all those things pertaining to it…’) to the Church and Canons of St Mary, Oseney. It was the final episode in a decades-long spat with the Priory of St Frideswide about the right to occupy the island, probably now known as Fiddler’s Island, and to charge rent for its use. The charter and the seal are on display in the Museum of Oxford.

It’s a small matter, but the significance of the charter, carrying the Common Seal of Oxford, is the assertion of municipal [1] identity and authority – and among the earliest of its kind that has survived (Exeter’s has been dated to around 1180).

In 1147 the citizens of Oxford had made the original gift to the friendly Abbey, conferring perpetual use of the land for an annual fee of half a mark [2]. The charter for this gift carried the personal seal of Alderman William de Chesney (who was also a baron and the City’s Governor) at a time when there was no common seal for the citizens of Oxford (though they describe themselves as a ‘commune’ – in the old sense of a formal and legal assembly of citizens).

However, in 1139, by command of King Stephen, the island had already been handed over to St Frideswide’s, as compensation for the loss of revenue after the forced removal of their market stalls from the centre of the town. Appeals to King Stephen and the Archbishop of Canterbury by the citizens of Oxford, various royal interventions, and some humiliating concessions by Oxford, resulted in 1191, in a royal writ returning Midney/Medley to St Frideswide’s, but allowing citizens to rent it for eight shillings a year [3] (an increase from the previous annual rent of 6s. 8d.). Those concessions were formalized in a charter, carrying the (now lost) common seal of the citizenry. The basis of the authority for this seal is not clear, but evidently St Frideswide’s accepted its legality. 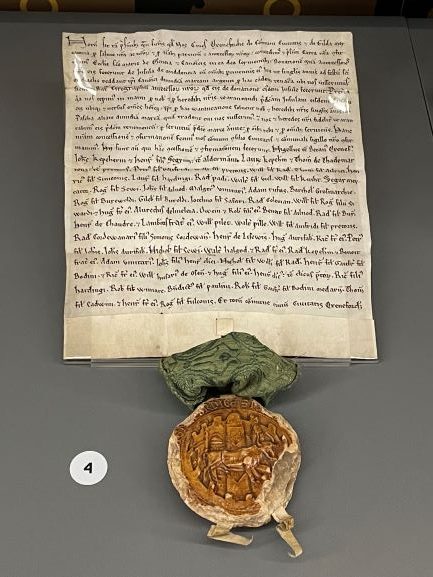 Seals have been used around the world for royal and official purposes since ancient times (they were in extensive use in Minoan society, for example). The principal use is to signify the moment of enactment of new laws or royal commands and to demonstrate the legality and authenticity of the documentation. The device (known as a seal or matrix or die) creates an impression in wax or clay, or some other medium, that is made on the document itself or attached to it (with ribbon or strips of vellum), as a separate entity. Sometimes the seal is made with an inked wooden or metal stamp (this is still common in China) or is embossed on the document without ink or colour.

Because seals were (and are) the symbol and instrument of power, they’re protected with tight security, often by officials of high status.

The Great Seal of the Realm is still used in the UK to embody the Sovereign and Head of State’s authority for certain appointments and enactments.

Some seals have less lofty, but still vital, purposes; among these are the seals of municipal, professional and commercial corporate bodies which may be granted by royal decree or by governments. These subsidiary bodies then use their seals to give formal authority to their local decisions and regulations.

Public affairs in medieval England were generally run by rich and powerful people – barons, land-owners, senior monks and clergy, leaders of guilds (aldermen) and the king’s local officials (sheriffs); peasants, labourers and servants played no part in civic affairs. In the case of Oxford, progress towards becoming a fully-fledged municipal authority was slow. We can see that this status had not been achieved in 1147, because the original charter passing the island of Medley to Oseney Abbey was given its authority by the seal of the local baron, William de Chesney, though written in the names of ‘We the citizens of Oxford of the commune of the City and of the Guild Merchant.’ What they do not appear to have had was a common seal which would have asserted their corporate authority to issue such a charter independently.

After his accession in 1154, following the period known as ‘the Anarchy’ when King Stephen was fighting his cousin Empress Matilda (also known as Maude) for the English throne, her son, Henry II refused to recognize some of the liberties and lands granted to London and Oxford by his grandfather, Henry I. In 1189 things changed with the crowning of King Richard (who was born in Oxford in 1157); he needed cash for his crusade and sold perpetual leaseholds of royal land to five cities, not including Oxford, all with annual payments attached (‘fee-farm’); he restored that arrangement made by Henry I for London and the new grant of ‘a commune’ – recognition as a municipal authority. Oxford refers to itself as a commune long before this, but grant of its fee-farm did not come until 1199.

It is not clear if Oxford was ever formally granted the status of commune, but both the 1147 and 1191 charters proclaim it as a fact: ‘We, the citizens of Oxford of the Commune of the City and of the Merchant Guild…’ And at the end of the 1191 document is the declaration of municipal independence is unambiguous: ‘We have made this concession and confirmation in the Common council of the City and we have confirmed it with our common seal’.

The Common Seal of Oxford

This hefty, medieval symbol of civic independence and authority depicts a walled city, including three (unrecognizable) towers, an ox walking from left to right (the modern ox walks the other way), and the assertive legend (in Latin): ‘The common seal of all the citizens of the City of Oxford’. It confirms the authenticity and legality of the city’s status and business.

This is among the oldest municipal seals surviving in England. It was used until it was destroyed by the council in 1662, ‘by reason of its absurd, ill and unhandsome cutting…dishonourable to the Citie and unfit to be used’. It was immediately replaced by a new seal. Since then, there have been several versions; the seal in current use was probably created and authorized when the Local Government Act 1972 was implemented in 1974.

The current seal has a die and a counterpart which leave a raised impression that is usually imposed on a red disc attached to the document. There is no longer a ceremonial ‘Keeper of the Seal’ but it is held in the custody of the Council’s Head of Law and Governance. It is attached to planning and other weighty documents.

Written by volunteer Bruce Hugman who thanks Liz Woolley for casting her local historian’s eye over the text and to Tony Morris, begetter of the brilliant Oxford website, Morris Oxford, for his advice.

This article is based largely on the work of R H C Davis, published under the title: An Oxford Charter of1191 and the beginnings of Municipal Freedom, published in Oxoniensia, Vol XXXIII, 1968.

It has been assumed that The Midney/Medley island referred to in the historical record is probably modern-day Fiddler’s island, if the original island had not shifted or disappeared, though this is not confirmed. The presence of Medley Weir is frequently mentioned until its removal in 1937 and Medley bridge still exists. See: Fiddler’s Island and Medley Weir Site: https://thames.me.uk/s01800.htm

A detailed history of Oxford, including this period, can be found in Victoria County History – Oxfordshire, published by The Institute of Historical Research, University of London; free access at:  https://www.british-history.ac.uk/vch/oxon/vol4/pp3-73

We are grateful to the City of Oxford for the image of the current Common Seal.

[1] ‘Municipal’ refers to the legal status of a community and its governing body and to the laws and regulations under which it operates its corporate, municipal duties. It derives from the Latin word municipium which was a special kind of social contract by which communities supplied Rome with troops in exchange for incorporation into the Roman Empire.

[3] Very difficult to assess the modern equivalent, but, maybe, around £1,000; this appears to be a low payment. See: https://regia.org/research/misc/costs.htm