Tracing Oxford’s history in its buildings

During my time in Oxford, I have seen many shops come and go. Nowadays they often leave with little or no sign they ever existed, but back in the day when advertising was hand painted on walls, the new owners often just covered it up. Taking a walk in Oxford and keeping your eyes open, you can still find the fading remains of some of these so-called ghost signs today as they get uncovered. In a broader definition they can also include metal signs or stone engravings. Have you noticed some of the ones below? 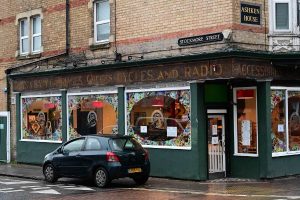 On the popular Cowley Road in East Oxford, you can find the traces of a shop that some of you may be very familiar with. Although now selling primarily electronics, then Curry’s were advertising above what is now Atomic Burger with the words “Accessories Curry’s Cycles”. On the side of the building on Stockmore Road the faded writing reads “Toys & Baby Carriages Curry’s Cycles and Radio”. The advertisement was likely put up sometime between 1934 and 1948. 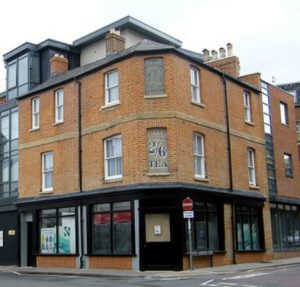 In Jericho two special signs are displayed above the Oxford Wine Café at 127 Walton Street: they are ghost signs covered up by ghost signs. The sign at the top reads “The finest Turkey coffee ¼ [meaning: one shilling and fourpence] in one pound canisters”. However, if you look very closely, you can make out another advertisement beneath the visible one. It says “G. Lumleys Grocery Provision Warehouse”. The previous corner shop also encouraged passers-by to “try Geo Lumleys 2/6 [meaning: two shillings and sixpence] tea” on the lower of the two signs. Again, a previous advertisement can be made out beneath this sign proclaiming “[illegible] Bacon, Crosse & Blackwell’s Pickles”. George Lumley was a grocer there until 1888. 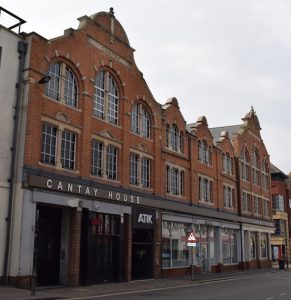 Still known today as Cantay House, the building on 36–39 Park End Street was originally used as a spacious warehouse for removals. This can be evidenced by the word “Depositories” in the right gable of the building. On the western side, “Archer Cowley & Co” is etched on a window. The Archer family, initially James Archer followed by his nephew William, founded the company together with Mr Cowley and built the warehouse to expand their furniture removal business. You can see an advertisement for the warehouse, first published in the 1920s, here. Eventually, the Cantay group took over Archer Cowley & Co in 1961, giving the building its current name, as can be seen on the left gable. 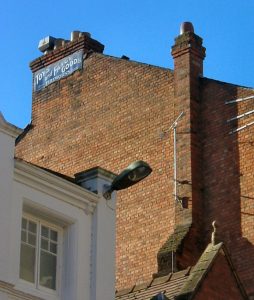 I love that I must have passed this sign countless times and never noticed it before. The enamel sign likely dates to the 1940s and is still visible on 9-13 George Street, today the Wig & Pen building. The toy shop it advertises seems to have been further down the road on 39 George Street, as pictured in this photo from Picture Oxon.

If you are interested in exploring more ghost signs, this website has a very nice collection of them.