Why is there a beaver on the coat of arms?

Why is there a beaver on the coat of arms?
🕑 5 min read

And while we’re at it, why is there an elephant?!

During the 16th century, Oxford became a complex place to govern as the relationship with the crown/centre changed. This was due to an increase in the privileges granted in the reissued charters of 1551 and 1555. These privileges increased the city corporation’s power thus allowing it a level of self-governance. This relationship had a further layer of complexity within its own walls due to the almost unique relationship between the city government and the university. Oxford city had its own charter and was ruled via a mayor and aldermen. Visual imagery such as coats of arms were a way of establishing and reinforcing the local governors right to rule. 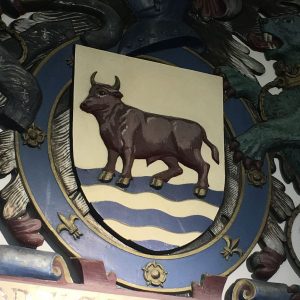 This is the coat of arms that was produced for Oxford City Corporation replacing a previous coat from the 1570s. During the 16th and 17th centuries, there was a proliferation of grants and arms to the new property-owning gentry who were beginning to represent the local governing elite. Coats of arms were an effective and relatively cheap way of fulfilling this right to rule through using visual imagery to enforce the civic government’s authority. It was also part of a new type of heraldry that became known as the heraldry of ‘decadence’ as it represented the concern of the elite with the administration of the state rather than tournaments and the battlefield. In Jacobean times there was an obsession with the trappings of rank and the notions of medieval chivalry.

There are different components to a coat of arms and these include; the shield, the crest and the supporters (normally various beasts) and the crown.

The Shield: In the 16th century the shield became broad as they were long and ornate rather than practical in design. The design for Oxford shield has been derived from a 14th century seal and shows an ox fording water. The water is represented by what is called a ‘barry wavy’ and can be seen as a visual pun.

The Crest and Crown: The lion on top, which is dotted with blue fleur-de-lis, was a unique crest granted to the city by Queen Elizabeth I, possibly in 1566. It wears the royal Imperial crown and holds the Tudor Rose in its paws.

The Supporters: These were often animals that supported the shield. They were known as the dexter (right) and sinister (left) supporter. The dexter supporter is an elephant ermined with a collar and chain, and the sinister supporter is a beaver with a ducal cornet round its neck with a gold chain.

The Motto: is the phrase meant to formally summarise the general motivation or intention of the local corporation. The Oxford motto is Fortis est Veritas, ‘strong is the truth’.

The coat of arms carried a variety of different symbolic meanings that promoted various messages to the people which is highlighted by the symbolism attached to the supporting animals which in this instance are a beaver and an elephant. The beaver had been hunted to extinction in England by this point and the last known record of any sighting was 1526. This depiction, therefore, would rely on illustrations and documents from previous decades.  It has been suggested the beaver represents possibly the Thames. The Thames was essential to trade but it also had added importance to the Oxford civic authorities, as the local corporation owned the city mill which produced much of the flour for the city thus generating until the 17th century a significant revenue source for the council.

The elephant was first mentioned in England as a gift from Louis IX of France to Henry III in 1255. It was often depicted in medieval bestiaries and along with other bestiary animals was adopted as a heraldic device and is illustrated in early heraldic treatises. The elephant symbolises huge strength and courage which were virtues promoted by civic authorities. These virtues were seen as evidence of godly virtue and thus promoted the local governors predestined right to govern.

Alternatively, the symbolism can be interpreted as reinforcing the centre/crown’s authority as animals were often seen as symbolic of ruling families. Its bearers appear to be taken from the arms of two members of the court of Elizabeth I who spent a week at Christ Church in 1566, namely:

The links to royal authority are further reinforced through the lion which is a symbol of royalty and the Tudor rose. Overall both of these views can be seen as having some credibility but probably the coats of arms could be seen as an easy way to legitimise and enforce the overall authority of the state whether local or central as well as promoting civic dignity.