We have worked with local communities on various heritage projects for more than a decade. You can read about some of the past work below.

“It was a lovely evening at the Windrush Years Next Generations project, just by looking at the display brought back all the memories for the past years, nice to see the old and young having a good time. We all had a good time with all the old-time songs. I must say a big thank you to Helen who did so much to help and not to forget Pat and Junie and all the other who gave their time, we had a good laugh. Sorry I had to leave (early) such a good launch. Hope there will be more such evenings. Thanks for a lovely time.” (Project participant, recorded at the exhibition launch, October 2018)

The Windrush Years – Next Generations exhibition project focused on Oxford’s Windrush Generation and their descendants. It aimed to provide a platform to enable participants to share their experiences of moving to Oxford and to celebrate the positive impact they have made to Oxford life.

There was a desire to share previously unheard voices and celebrate the achievements of community elders. During the course of the project, the Windrush scandal became headline news. The unmasking of the government’s harmful and unjust treatment of people belonging to Windrush generations highlighted the importance and urgency of amplifying voices of this community.

The Windrush Years – Next Generations exhibition project began in January 2018, in partnership with the Afrikan and Caribbean Kultural Heritage Initiative (ACKHI) and Ber-Bedo Kelo Lonyo United Women’s Organisation. The exhibition opened on Saturday 6th October 2018. It remained open until March 2019, and the exhibition project legacy continued via the iCreative project, supported by Fusion Arts. This project saw a group of young people creating artworks inspired by objects and oral histories in the exhibition.

The Windrush Anniversary programme planning group continues to meet regularly and have since organised other events to commemorate and celebrate the legacies of our Windrush Generations.

View our online exhibition based on the Windrush years project

Created in partnership with the Oxfordshire Hospital School, Oxfordshire Health Archives, and Oxford Hospitals Charity, the ‘Healing Spaces – Child Health in Oxford’ exhibition told the history of children and young people’s health in Oxford, focusing on their personal experiences. 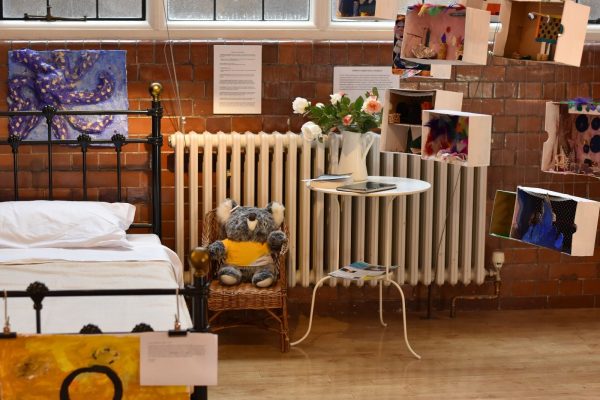 The free exhibition ran from May to August 2019. It included objects and information on the history of child health in Oxford, most of them sourced from the Oxfordshire Health Archives and the Oxfordshire Hospital School.

Working with the Oxfordshire Hospital School, we created panels featuring text and images relating to 100 years of its fascinating history, showcasing some of the support it has offered young people with medical needs in Oxfordshire since its founding in 1920.

The exhibition also contained artwork, photography, and creative writing authored by the young pupils, with personal reflections on the theme of ‘Healing Spaces.’

Visitors to the exhibition saw a traditional hospital ward, reimagined through artwork created by young people at the Oxfordshire Hospital School today, and got the opportunity to add their own ideas on the kinds of spaces that help us heal.

The exhibition featured selected podcasts from the OHS’ award-winning ‘Poetry Conversations on the Hospital Hubbub’ project.

Catherine Costello, the OHS Curriculum Leader for English and the Arts, said:

“We’re very grateful to the Museum of Oxford for offering us the opportunity to work on this project. It has been fascinating to delve into the artifacts held by the school and the wider museums service, to gain a picture of how hospital school provision has evolved, within these changing environments.”

The idea for the exhibition was initially developed with two main community partners: Oxford Pride and Tales of Our City (a grassroots heritage project which collects oral testimonies of Oxford’s LGBTIQA+ people in Oxford, telling the stories of their life in the city from the 1940s until today). From these foundations, the project grew to become community-led through establishing a steering group which made all the key decisions about the exhibition.

The group was made up of people active in various parts of our LGBTIQA+ communities, encompassing both university and city organisations, activists, and organisers. Eighteen volunteers contributed as members of the steering group, interviewers, writers, transcribers, photographers, researchers, and event assistants.

The theme of the exhibition was ‘spaces’, and it showcased over twenty past and present LGBTIQA+ spaces around Oxford. This was done through a map of these spaces, created by volunteer Anja Mohorko; objects loaned from community members; archival videos; reproductions of historic queer publications; text and photographic archives; original artwork, commissioned from local artist, writer and intersex rights activist Valentino Vecchietti; video and audio pieces; children’s art on the theme of ‘rainbow families’; portraits by local artist Jack Smith; and oral histories, which visitors could listen to by dialling a 1990s phone.

The exhibition was not static; it was dynamic and responsive, allowing visitors to respond to everything on display by leaving post-it notes and giving the option to get in touch with us electronically as well.

Through workshops led by local queer and queer inclusive youth organisations (MyNormal, Young Women’s Music Project and Transition by Design), audio and video pieces were created as responses to the exhibition. These were then also incorporated into the displays. People got in touch with us to offer new original items, which were added in as well.

The exhibition saw over 12,000 visitors; over 100 post-its were left in the exhibition, many containing personal and emotive comments.

The exhibition, created with a socially and environmentally responsible ethos at heart, won the Sustainable Project of the Year award at the Museums & Heritage Show in September 2020. Online and outdoor versions have been created in early 2021.

In 2019-21, we ran Mixing Matters, a project which started through a partnership between the Museum of Oxford and the Oxford Hindu Temple & Community Centre Project, and has involved three more groups: the Filipino Community of Oxfordshire, the Nepalese Community Oxfordshire, and WOW SPACE, a group for migrant women run by African Families in the UK.

​The aim of the project was to help our communities connect and celebrate their distinct culinary heritage. We held several sessions centred around our favourite recipes and meaningful food-related objects. These sessions allowed us to share memories which are most often only heard by our families with wider audiences. Through guided reminiscence exercises and facilitated art-making, we collected audio and photographic recordings of culinary objects which carry within them our family histories, marked in one way or another by journeying and movement.

We planned to hold three community feasts, but due to the Coronavirus outbreak in early 2020, we had to postpone two of them. The one we had was the Filipino Feast, held at the Rose Hill Community Centre in January 2020. The sessions continued online and the project was celebrated with a temporary exhibition at the Museum of Oxford in 2021.

View our online exhibition based on the Mixing Matters project

We have been working with Rana Ibrahim, founder and director of the Iraqi Women Art & War project, since 2020. In 2022, the group’s exhibition, Of Ordinary Things, was displayed in our main gallery (April-September). The group met regularly at the museum to socialise, plan their work together, and take part in the museum’s family activities during school holidays. We enjoyed several gatherings together, from an Eid celebration to a summer party with pizza and music. This ongoing collaboration has led to a few objects representing the group now being featured in our permanen 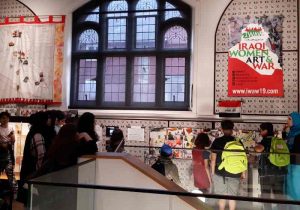 t displays. For more information about the project, go to www.iwaw19.com.

Be the first to find out what’s on at MOX, including exclusive offers and sneak peeks behind-the-scenes.