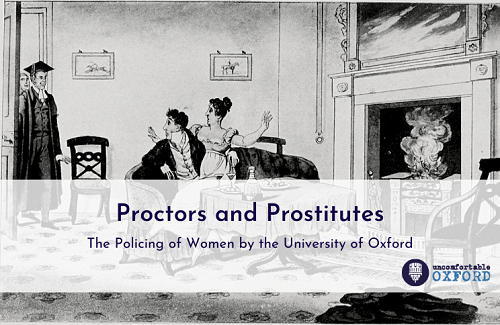 The Policing of Women by the University of Oxford with Uncomfortable Oxford.

The issue of a woman’s safety and legitimacy on the streets is nothing new when you look at history: in 19th century Oxford, the city’s famed university actually went to great lengths to control, police, and punish working townswomen who were suspected of having  ‘immoral intentions.’

More widely, the question of prostitution was an important one for Victorian society in general. However, it was seen as especially pressing in Oxford, because of its wealthy and young male undergraduate population.

At a time when women still fight for their right to go out at night safely and without shame, and while #reclaimthisstreets remains a viral rallying call, this lecture will explore the long history of unequal access to our streets.

Join Uncomfortable Oxford in the Museum of Oxford for this unique talk.